We have all heard about atoms, and directly experience the elements they form. Iron, copper, gold and silver are everyday stuff. We have also heard that atoms are made from neutrons protons and electrons. The neutrons and protons are part of a small central positively charged nucleus, while the negatively charged electrons exist in “orbitals” within a much larger volume. It is commonly said that most of the atom’s volume is empty space.

The atomic elements are the stuff the cosmos makes after it has made the protons, electrons, and the neucleons. There are 92 naturally occurring elements with an average distribution in nature that can be estimated based on our astronomical observations.

The atomic concept dates back thousands of years in human history. There are many good sources readily available that describe this history in detail. Atomic history is not the purpose of this work.

By the 1950’s, the basic model of the atom was visualized as consisting of a nucleus – a small spherical body consisting of a number of densely packed positively charged protons and neutral neutrons – surrounded by negatively charged electrons (equal to the proton number in a neutral atom) that occupied the much larger volume of the overall atom.

Most of the atom’s mass (more than 99.8%) is contained within the volume of the nucleus. The electrons carried only a small fraction of the atom’s total mass. Once an estimate of the physical size of the nucleus was made, its density (was found to be enormous, more than one hundred trillion times greater than water. The atomic volume on the other hand was practically empty, containing just the small mass of the dynamic electrons.

It seemed clear that the negatively charged electrons were bound to the positively charged nucleus because of the attraction between unlike electrical charges and repelled by each other because of the repulsion between like electrical charges. This is the well known Coulomb force. By the 1930’s an electron shell model (quantum electrodynamics) successfully described basic atomic architecture and its interaction with radiation.

Using existing concepts, atomic structure can be modeled as a parking garage building for dynamic electrons. Each atomic garage is unique, although built from a standard set of specifications. In all atoms, the underlying topological design remains constant.

The electrons can be visualized as paying a parking fee, from the potential energy of their electric field, as they dynamically park at a specific speed, in some available place in the spherical positive electric field garage. The cost of the parking ticket is paid with the energy of the released photon.

The electric hollows below the level where the electron is parked, determines the cost of each ticket, issues the photon, and adjusts the residual electric field appropriately. The photon ticket can be redeemed by an electron, allowing it to park in a higher shell at a slower speed, or leave the atomic parking structure entirely (the photo-electric effect). 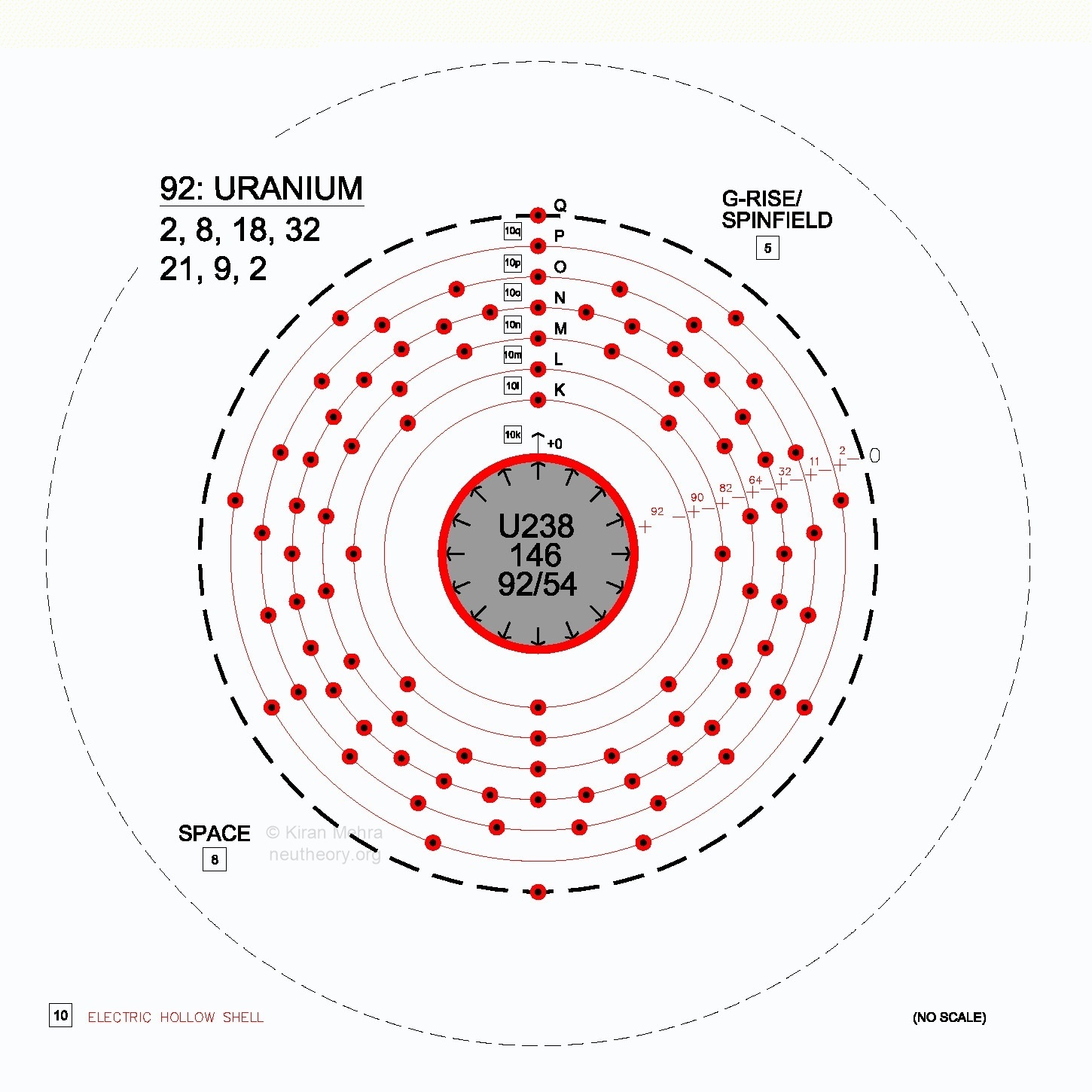 Each parking sub-shell has stalls for (s=1, p=3, d=5, f=7) electron pairs. There are a total of 118 parking stalls available in the standardized atomic parking structure design corresponding to the Periodic Table of the Elements. See Figure 4.1 for the parking structure of *Uranium-238 with 92 electrons, the last naturally found isotope.

As an example, the first use of parking level 7 is Francium with its 87 electrons. The 87th electron parks itself in one of the two stalls in the 7s sub-shell instead of starting the 5f or 6d sub-shells which are completely open. The next (88th) electron with the element Radium occupies the second of the two 7s stalls. The 7s sub-shell of all atoms after Radium is always filled. *
* “The Elements” by Theodore Grey

Atoms have a finite size that can be defined by 3 quantities; the nuclear charge radius, the atomic radius, and in Neu Theory the spinfield radius: