What Hold's The Atomic Nucleus Together?

As the atomic model was developed by scientists, what was not clear was how the protons stayed together tightly packed into such a small volume, as defined by the small charge radius of the nucleus. Because of the strong repulsion between like electrical charges, the Coulomb force at such short distances is enormous and should explode the nucleus with great force. However, with the exception of some “radioactive” atoms the nuclei always remain stable.

What holds the atomic nucleus together?

This question has been at the heart of nuclear science since 1932 after James Chadwick’s discovery of the neutron, which showed that the nucleus is made from protons and neutrons.

The argument goes like this. There is a strong electric repulsive force between the positive proton charges, so how does a nucleus consisting of many protons and neutrons stay bound together in such a small volume? Obviously, there must be another force that counteracts the electric repulsion between protons.

The concept of a strong attractive nuclear force between protons and neutrons was quantitatively described in 1934 by Hideki Yukawa by introducing the meson, a “virtual” particle. A virtual particle cannot be directly detected and occurs over very short intervals of time and space with correspondingly indefinite energy and momenta.

From this beginning more than eighty years ago, in current theory, the nuclear force exists as a “residual” player in the “strong interaction” that holds the quarks of a “hadron” together.

This nuclear force of current science is strongly attractive, and unlike electricity and magnetism, decreases faster than the inverse square of distance limiting it to a very short range, in the magnitude of around one femtometer (10-15) between centers of the protons and neutrons. At distances less than 0.7 fm between centers, the nuclear force is considered to become strongly repulsive.

The strong force is designated as one of the four fundamental forces of nature. Without it the nucleus cannot be held together. The physical reality of the strong force is not an open question by current science.

The Neu Theory model of nuclear structure does not require the use of a strong force as it claims that the nucleus is stable  because:

The key word is within. In Neu Theory, all the individual proton electric charge shells have migrated above the surface of the neucleonic cellular membrane in concentric “Z” layers of isotropic spin energy tension bands that act together as a compressive binding force that holds the neucleons bound together.

The Neu Theory neucleon (note different spelling), is a single cell nuclear object with one, two, or three cores below an electric charge shield. Specifically a neutron cell (n), a deuteron cell (H2+), or a helion cell (He3++).

What is significant to the model, is that there are no free proton cores in a nuclide, they are all captive to a neutron cell as deuterons or helions, with the proton’s charge shell having migrated above the neutral S3 surface of the neucleon cell, or above the composite S3 neutral membrane surface of a cluster of neucleon cells.

The Neu Theory nuclear model works, because electric charge is hypothesized, as a thin discrete layer of isotropic spin energy moving at the accelerating speed of light, that can be topologically “detached” from the proton’s S1 spinning matter surface, to “migrate” above the neutral S3 non-spinning surface of the neucleon membrane. When the spinning captive proton cores are immersed in the neucleonic plasm matter, they are no longer “jacketed” with their charge shells.

In principle, there can be no charge below the neutral neucleonic membrane. This is very different than the current view, that electric charge is a property that is permanently contained within the bodies of the quarks (or electrons) and can never leave.

With free proton and electron ions, the electric charge shells are directly touching a spinning Type I matter surface (S1 for protons, and S2 for electrons). With neucleons, the electric charge shells are directly touching the S3 neucleonic membrane surface(s), which is non-spinning Type I matter. All spinning cores are immersed within the individual non-spinning compressible Type II matter plasm particles contained within a deformable non-spinning neucleonic membrane.

To understand nuclear structure we need to clearly understand the form and properties of matter and electric charge.

This is all true and verifiable.

The size of a free proton or some nuclide is defined by its charge radius. The charge radius is a well measured nuclear quantity, where even a small size difference between the nuclei of different isotopes can be determined. For comparative purposes the charge radius can be used to define the physical volume of a nuclide. The Neu Mass & Charge Radii Table uses these radii to calculate the volume and other values of nuclei based on this measured size. If the charge radius is changed the calculated values will adjust.

The Distribution of Charge

A key question must still be answered. How is the positive electric charge distributed with a proton or nuclide? Where does charge reside?

This is where the Neu Theory model fundamentally departs from current science.

Current Science: The historical view of charge distribution was that the total electric charge is uniformly distributed throughout the volume of the proton. A current (2012) view by the Standard Model of particle physics is that the proton’s positive charge is actually a composite quantity made from three fractional charges (+2/3, +2/3,-1/3) carried by the three quarks that constitute the proton. This did not change the historical view that electric charge is contained within the body of the proton.

Neu Theory: the model hypothesizes that total electric charge of the free proton (and the electron) is uniformly distributed on a neutral spinning Type I matter surface; while the total electric charge of a nuclide is uniformly distributed on a neutral non-spinning Type I matter surface(s), as a discrete thin layer or multiple layers (with a fixed volume) of isotropic spin energy moving at the accelerating speed of light.

In principle there is no charge allowed within the nuclide body. This is because there cannot be a de-linked energy form (spin or rise) within the body of a neutron, as that would make the neutron topologically more than one unit of number, which is not allowed by the rules of number. As the nuclide is made from neucleons, which are just neutrons with one, two, or three cores, it follows there will not be any charge below a nuclide.

With a specific nuclide the multiple electric charges are uniformly distributed in thin layers of isotropic spin movement/energy that act as compression bands that are discrete from the non-rotating surface(s) of the neutral neucleonic membrane matter structure. Electric tension within the naturally accelerating spin movement/energy bands is what keeps the neutral single cell neucleon molecules bound together in a cluster.

There is no electric charge within any nuclide no matter how many protons it contains!

The postulating of a “strong” fundamental attractive force of nature that overrides the immense force of Coulomb repulsion is not required. The electric force is sufficient for nature to do its magic.

The Neu Theory electric charges are modeled as two topologically mirror-split equal forms of de-linked spin movement/energy (elementary forms [6+] & [6-]) with their own measurable elementary physical properties (i.e., shape, size, quantity and structure). These properties are discrete from the physical properties of the spinning neutral matter of the proton and the electron they surround, and discrete from other charge shells in a multiple charge layer nuclide. 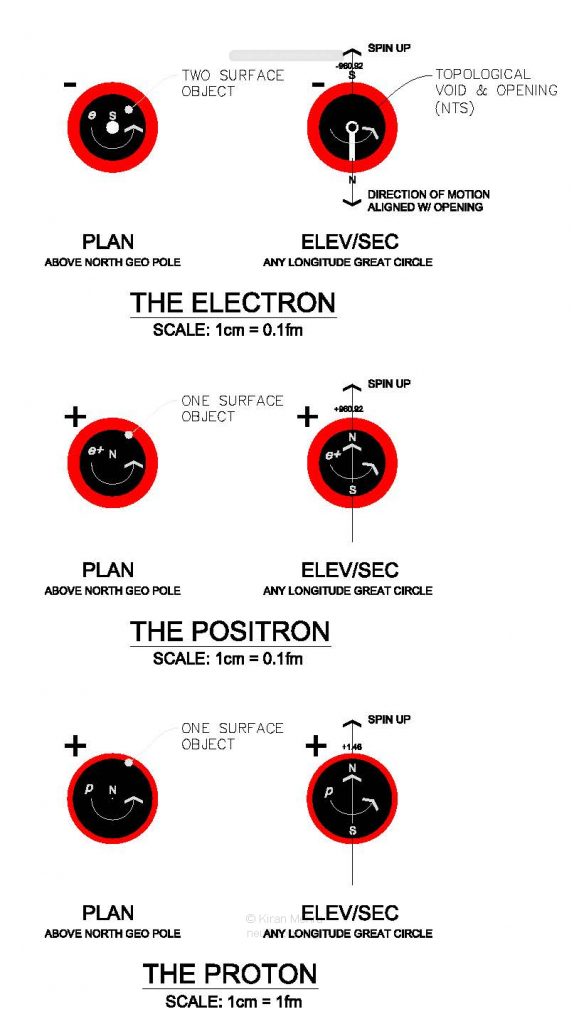 The positive and negative electric charge shells are exactly alike except they are topologically mirrored. As the same specific volume of charge surrounds different size balls their charge shell thickness is proportionately different. The electron charge shell is approximately 125 times thicker than the proton’s charge shell.

Fusion is the merging of the charge shields, that surround two or more nuclides, when the nuclides are forced to touch each other, thereby forming a single charge shield surrounding a larger number nuclide. The total number of individual charge shells before and after remains the same.

The merging of two electric supercells is also fusion at a much larger cosmic scale.

Fission is the separation of a larger number charge shield into two or more smaller number charge shields. This occurs when a large deuteron number nuclide can no longer maintain its stability and breaks apart into one or more smaller deuteron number nuclides that carry their charge shell layers with them. The emission of a two deuteron alpha particle with its two charge shells is a common example of fission. The total number of individual charge shells before and after remain constant.

Internal nuclear forces in the Neu Theory Model are the ordinary everyday g-forces of nature, nothing special is required. Three of the four natural accelerations play the major role:

The small g-rise pressure from space [8] is external to the charge shield, and directly opposite the pressure from the g-rise of matter. Space pressure does not significantly impact internal nuclide structure.

The spinfield [5] form of the nuclide extends into space beyond the atomic radius, and does not impact internal nuclide structure.

It is the writer’s opinion that historically, since 1932, the internal structure of the atom, repository to all of nature’s ordinary matter, has not been clearly understood. This lack of clarity at the subatomic scale began after the discovery of the neutron in 1932 and has continued to date. There are two main reasons for this:

The following concepts are used by Neu Theory in its description of atomic nuclear structure and behavior.

Note: These basic nuclear concepts are specific to Neu Theory and are not used by current science:

The following terms are used by Neu Theory in its description of atomic nuclear structure and behavior. Most of the nuclear terms are also used by current science, however, this is the meaning as used in this model. A few terms are specific to the Neu Theory model: