The Physical Direction of Nature

In the Neu Theory model we live in a one-way universe. The direction of movement is permanently fixed by nature. What do we mean?

The first two elementary particles of matter, the core [1a][1b], and the membrane as the b-state electron [2b], spin in one direction only at the accelerating speed of light. This perpetual  physical spin, called g-spin, establishes an axis of rotation of the physical body that points in two opposite directions in space. One of the directions we call North, and the other opposite direction we call South. The axis of rotation, has a physical length, and unless constrained, is free to orient itself in any direction of space.

It is hypothesized by Neu Theory, that no amount of energy or force in nature can change the direction of the physical g-spin of these two objects. This primal direction is built into nature.

If anti-matter is defined as core or membrane matter with an opposite g-spin then there has never been and there never will be any anti-matter in the universe.

When the three matter particles add together as a neutron, only the core matter [1a] g-spins, the membrane matter [2a] and the topologically contained plasm matter [3a] do not g-spin. After the neutron separates into the electric matter couple, the core – now the proton [1b] with its positive electric charge shell [6+], and the flipped inside out membrane – now the ball-like electron [2b] with its negative electric charge shell [6-], both g-spin in the same direction as the original neutron core [1a].

The physical bodies of the electric charge shells, are elementary particles made from pure isotropic spin absolute movement/energy, and do not g-spin, as they already isotropically move at the accelerating speed of light.

As they g-spin in the same direction, the neutron core, the proton core, the electron, and the positron become permanent natural magnets with a dipole length, magnetic strength and polarity that is fixed and never changes. See Figure 0.7.

The captive protons in deuteron cells and helion cells are exceptions. It is hypothesized that while their magnetic polarity never changes, the dipole length and magnetic strength of the captive proton cores does in fact change, as their mass, size, and time of spin changes.

Magnetic dipoles in the neucleon cells of all atomic clusters are always aligned (parallel or anti-parallel) with a common nuclide spin axis. 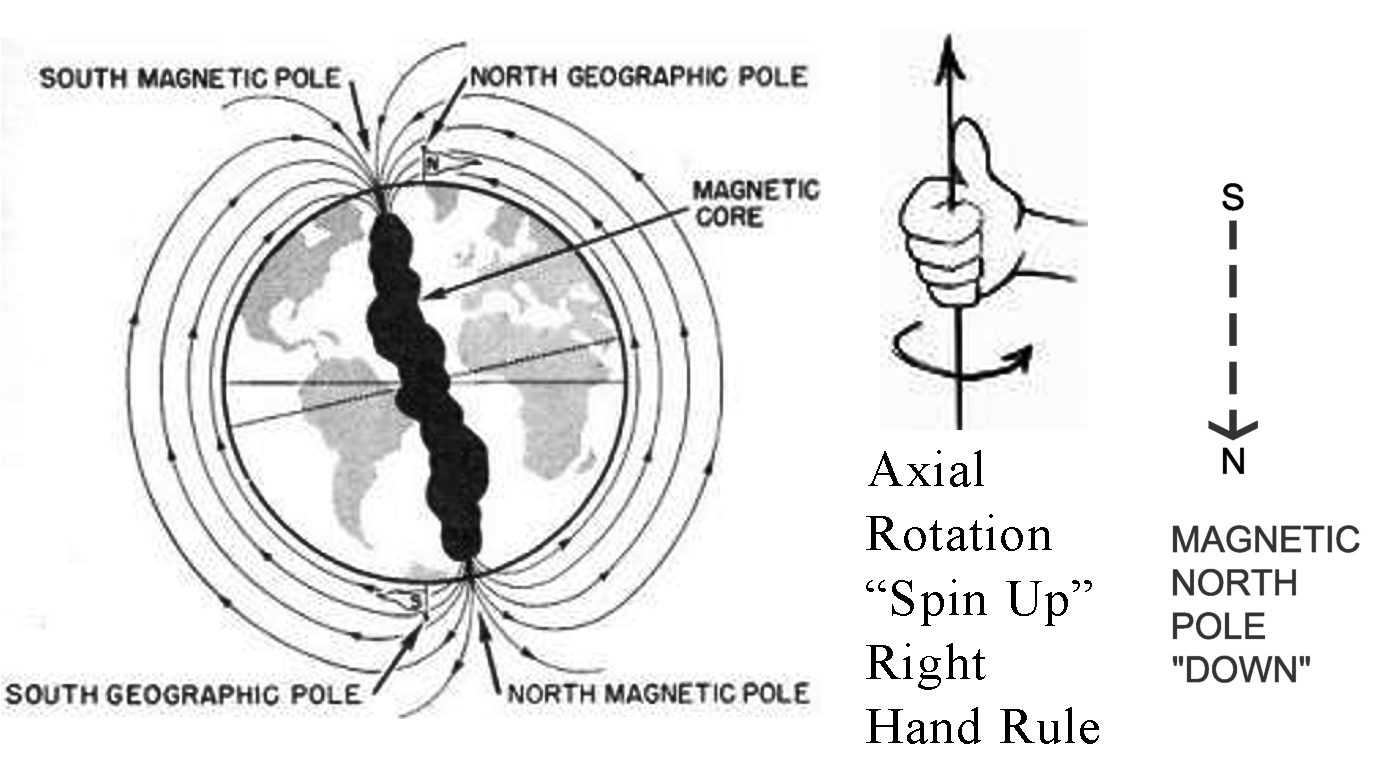 The spinning objects in the diagrams used by the model, are typically shown in the spin-up position, unless specifically noted otherwise.

In Neu Theory, the physical g-spin of any primary matter object is always counted as one unit of spin. This is different than current science where physical spin is always counted as a one-half unit. In both Neu Theory and current science, when primary spinning objects come together their spins can only align in the same direction (called parallel), or they can align in opposite directions (called anti-parallel). This opposite pairing allows for a net spin balance of zero.

The magnetic dipole arrow is shown as a dashed (sometimes shown solid) black or green line with the arrowhead representing the north magnetic pole.

Both the axial rotation arrow and the and the magnetic dipole arrow are “vectors”, that is they represent a magnitude and a direction. The arrowheads allow us to accurately depict the invariant direction of rotation and the fixed magnetic dipoles of the primary spinning matter objects when they are coming or going away from us (the observer); or when they are being added together as part of a composite object.