The neucleon hypothesis claims that all atomic nuclei are built from three types of one cell objects called neucleons. These are the building blocks of nuclear structure. (See Figure 4.2). The three neucleons also represent main stages of the matter cycle.

The three neucleons in the order of creation are:

Individual deuterons combine by the process of charge shell fusion into larger structures, much like clusters of fish eggs. Neutrons are synthesized and added to nuclides. The membranes of the individual cells remain intact, and completely touch each other without gaps or overlaps. There is a “double membrane wall” between adjacent neucleons.

The fermionic displacement pressure of g-rise, and spin/magnetic alignment, along with axial compression from the electric charge shell “straight jacket”, are sufficient to hold the neucleon cluster bound together.

The Neu Theory model does not require the short range nuclear force of current science (more than 100 times stronger than the electric force) to overcome the strong repulsion between protons.

Once the separate neucleon charge shell layers (fuse) together into one common charge shield, the electric force of repulsion between neucleon charge shells no longer applies. The fermionic layers of isotropic shells of accelerating spin energy now act in unison as a one-way compressive force (g-fall) that holds the neucleons together as a stable atomic nuclide. A balance is reached between charge shell tension and the combined g-rise force of the nuclide. This equilibrium results in a fractional decrease of mass that has been precisely measured ( Neu Mass & Charge Radii Table).

The three neucleons, and subsequently neucleon clusters up to Nickle, are synthesized in stellar cores. Deuterons are the first to be synthesized as they require the smallest number stars.

The synthesis of the deuteron, the first nucleon, is also the first step in the rebirth of a neutron (Figure 4.3). The deuteron is made by two protons and one electron, combining together in a spin-on process, that is the reverse of the spin-off that occurred with neutron fragmentation (Figure 3.1), with one key difference. The difference is that as the electron membrane flips over a proton becoming the neucleonic membrane of a neutron, it also envelops another proton core within the newly created hollow plasm. When the deuteron membrane is formed the electron hole is topologically removed.

During the spin-on process, the electric charge shell of the now “captive” proton detaches from its spinning core, and migrates over the non-spinning neutron membrane creating a deuteron, with a mass number of 2 and an atomic number of 1.

The mass of the deuteron is 0.001535 u less than the combined mass of two protons and one electron that synthesize into the deuteron. Neu Theory hypothesizes that all the “mass defect”, or “binding energy”of the deuteron comes from the captive proton. The proton core that becomes the neutron core keeps its mass and does not contribute to the mass loss.

It is important to note that the captive proton actually loses a total of 0.002368u of mass. This is because 0.000833u of rise energy is required to link with the 0.000833u spin energy of the two charge shells to recreate the 0.000833u of neucleonic plasm matter contained within the neucleonic hollow that remains with the deuteron.

An electron cannot just flip over a proton and recreate a neutron. The neucleonic hollow plasm needs 0.000833u of rise energy to combine with the 0.000833u of spin energy of the electric charge couple, and the only available source, assuming that environmental kinetic rise energy is not used, is to de-link mass from another proton.

The deuteron is a precursor to further acts of fusion. Without this initial act of charge migration, it is speculated, that atoms beyond Hydrogen-1 could not be formed.

The charge radius of the deuteron is measured as 2.1424 fm, much larger than the minimum spherical volume necessary to fit the two cores, however there is a measured quadrupole with the prolate shape.

However deuterons may deform within a nuclide, all the spinning cores are hypothesized to stay aligned to a common nuclide spin axis. Their +2 spin can be parallel or anti-parallel. 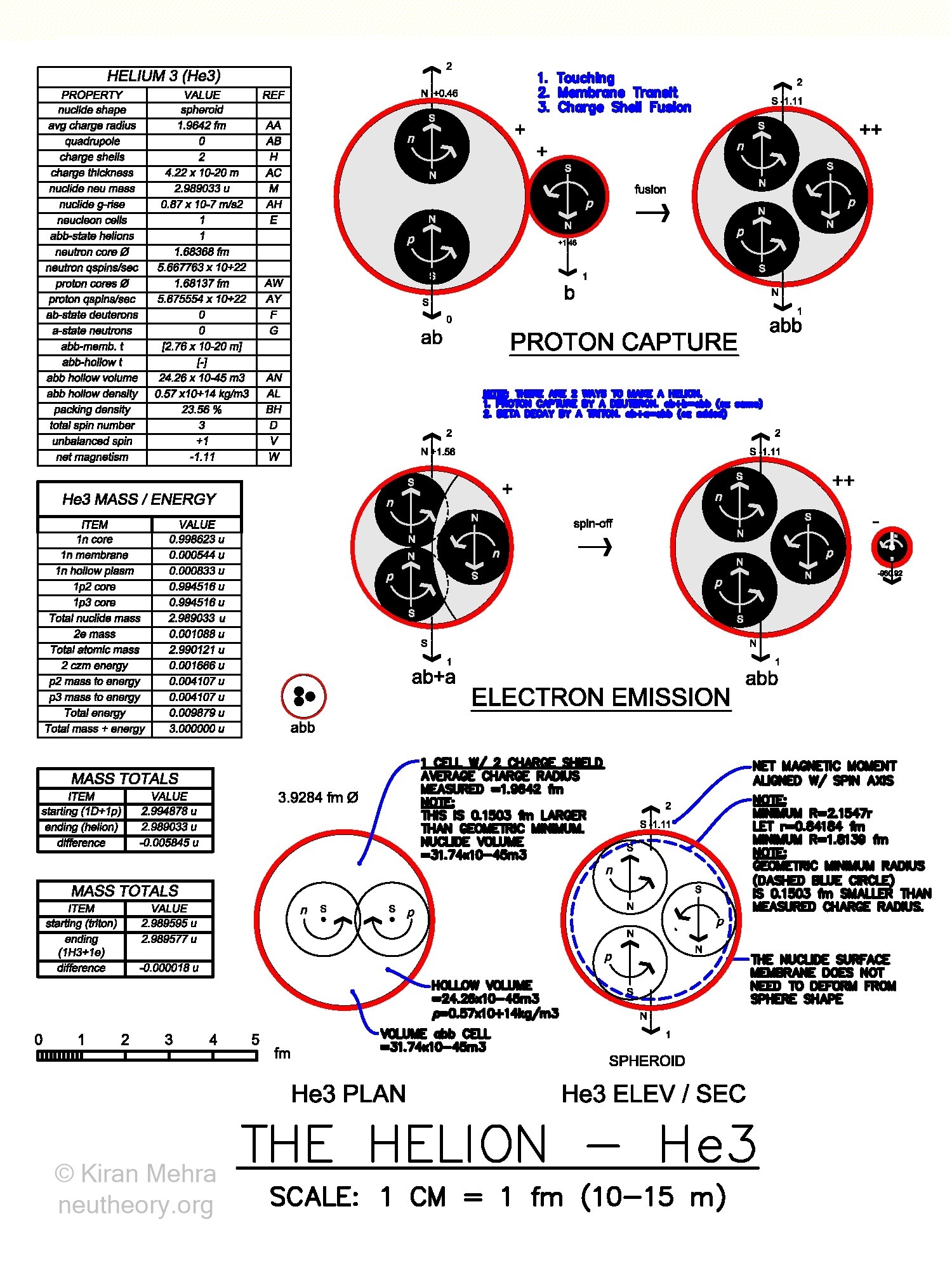 There are two methods by which helions are manufactured: (See Figure 4.4)

The measured charge radius of the helion is 1.9642 fm. The measured radius, is 0.1503 fm larger than the geometric minimum spherical packing radius of 1.8139 fm, so there is no problem with the three cores fitting within this spherical volume.

As the helion is made by the electron emission (spin-off) process the universal charge/zomon number is increased by one and the universal neutral number is reduced by one.

The third neucleon to be synthesized, is a neutron below the charge shield of another nuclide. The neutron neucleon is made in a stellar process, when a helion captures an electron (spin-on) and becomes a triton, which is simply a deuteron with a bound neutron below a common charge shield. See Figure 4.5. 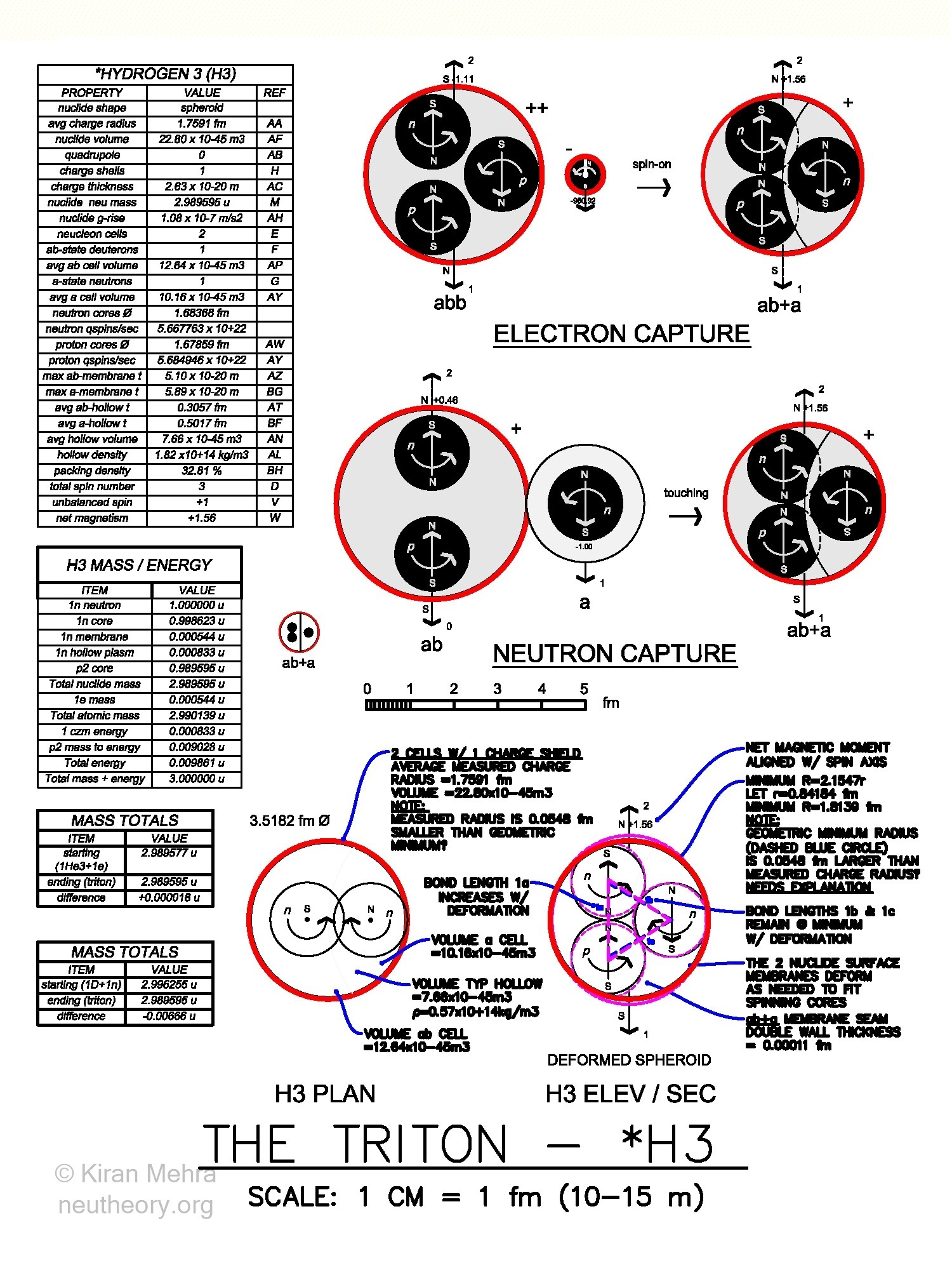 Neutron synthesis by electron capture is unique, as 0.000018u of mass is made (not lost) by the re-linking of spin and rise energy. This small increase in mass is a crucial part of the matter cycle process, as it makes fresh neutron plasm.

It is hypothesized, that the re-linked rise energy comes from environmental kinetic energy, not taken from neucleon protons . These newly created neutrons provide the source from which fresh zomons will be manufactured to maintain the universal volume of expanding and diffusing-in-place space.

The measured charge radius of the triton is 1.7591 fm. This value is 0.0548 fm smaller than the geometric minimum spherical packing radius of 1.8139 fm. The triton also has no evidence of a quadrupole. This implies a spherical nuclide. This smaller measured value needs an explanation as three perfectly spherical cores, the neutron core with its 1.68386 fm diameter, and the two proton cores each with a 1.68137 fm diameter, just do not geometrically fit within this spherical volume.

As the neutron neucleon is made by electron capture (spin-on) the universal charge/zome number is reduced by one and the universal neutral number increased by one..