The Primal Prototype Object of Nature

All elementary matter and energy particles in nature are made from the following two primitive shapes.

The magnetic field has the primitive shape of a donut or:

The Primal Prototype Object of Nature

The three primitive shapes combine together to make one composite object similar to an egg or a cell. This is the ordinary neutron. All physical structures in nature are made from a large number of these primal cells that must exist in one of two physical states, the a-state as the neutron or the b-state as the hydrogen atom.

The ordinary neutron is hypothesized as the primal prototype object of nature, the a-state. The neutron is completely neutral. There is no evidence of any electric charge within the body of a neutron. The neutron has the topology of a simple 3 part cell with the dynamic properties of: 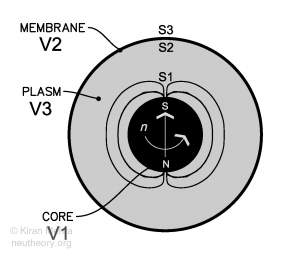 The neutron magnetic dipole field (ball w/ one hole shape) is generated by the absolute density matter core spinning at the accelerating speed of absolute movement. This is a natural movement/synergy field that projects a magnetomotive force into space that varies in strength inversely with the square of the distance away from the spinning core.

In the Neu Theory model the spinfield has the same effect as the "spacetime" of Einstein’s General Relativity Theory. The crucial difference is the nature of space and time itself: