It is postulated by the model that there are twin primal movement/energy forms in nature called Spin & Rise. We can’t say where these quantum forms come from. They are considered a primordial pre-existing condition.

There are N neutrons in the universe. This number is fixed forever. Neutrons exist in one of two natural states, the a-state as the neutron, and the b-state as hydrogen.

To restate, the universe is made from an invariant number of two quantum forms of pure immortal energy that have linked together making 3 quanta of primal matter. It is the measurable physical properties and behavior of these 3 quanta that provides the elementary particles and forces of nature. This is the starting place of the Neu Theory model.

The Neu Theory visual model begins as a thought experiment. Consider two small discrete balls of pure movement/energy each with a volume slightly larger than a proton, approximately 2.502×10-45 m3 (Figure 1.1). The energy value of each ball is approximately 939.565 MeV, representing 100% of its quantum value. This primal discrete state is purely imaginary and not observed in nature.

Each colored ball is a composite of the six absolute properties noted above. 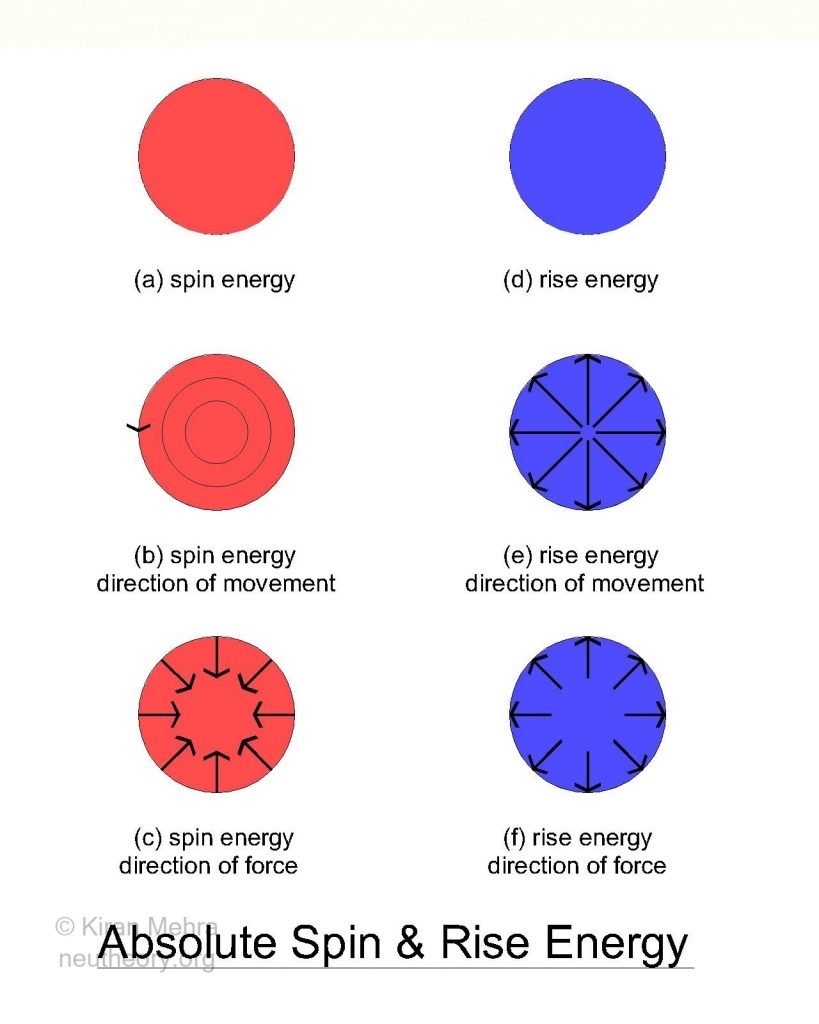 During all natural phenomena the underlying absolute direction of the twin movement/energy forms never changes and is always at right angles to the other.

Imagine a "frozen" moment of time where the red ball (Fig 1.1a) is homogeneously filled with a fixed ~939.565 MeV of naturally bending movement/energy at the speed of light that is naturally accelerating with the constant "a". The quantity of movement in the ball is equivalent to its energy. The density of spin energy is equivalent to the volume of the ball and is equal to 3.75×1053 eV/m3. This density is hypothesized as a constant for spin energy.

The direction of spin movement is an isotropic bending or closing that follows the shape of the surface of the ball in all directions parallel to the surface in imaginary concentric shells that extend – in layer after arbitrarily thin layer – all the way down to the center of the ball.

At each shell or layer the movement has isotropic closure at the accelerating speed of light bending in tighter and tighter spherical shells around the center of the ball.

Now pretend we can cut the ball into two halves and look at a cross section of the movement form. (Fig. 1.1b) The concentric circles represent concentric shells of closing movement/energy. The movement arrows of all shells point in all directions at once ending back to themselves. Irrespective of where the ball is cut in half the cross section will always look the same. This is symbolic of spin isotropy.

Left by itself the free spin movement/energy form has a natural tendency to keep closing at the accelerating speed of light, always trying to get smaller, with its fixed quantity of energy maintaining a homogeneous volume. (See electric shell)

As it accelerates, the direction of the spin force is at right angles to its direction of movement and towards the center of the ball (Fig 1.1c).

Imagine a "frozen" moment of time where the blue ball (Fig 1.1d) is homogeneously filled with a fixed quantity ~939.565 MeV of naturally straight (radially expanding) movement at the accelerating speed of light. The quantity of movement in the ball is equivalent to its energy. The density of rise energy is equivalent to the volume of the ball and is equal to 3.75×1053 eV/m3. This is considered the maximum density for rise energy.

The energy value of the blue ball and the red ball are exactly equal at ~939.565 MeV each.

The direction of rise movement is an isotropic straight radially diverging movement away from the center of the ball. The movement/energy is an expansion and diffusion-in-place, homogeneously filling a larger and larger volume with the same quantity of energy at the accelerating speed of light.

Now pretend we can cut the ball into two halves and look at a cross section of the rise movement/energy form. (Fig 1.1e) Irrespective of how the ball is cut in half the cross section will always look the same. This is symbolic of rise isotropy and direction.

Left by itself the rise movement/energy form has a natural tendency to expand outward, like an explosion at the speed of light that is accelerating. In this situation the free rise energy will homogeneously diffuse-in-place exponentially as it becomes a larger and larger spherical volume. (See zomon)

It is postulated by the model, that in nature, meaning the entire universe, all pairs of quantum spin & rise movement/energies have been primordially linked together synthesizing quantum spinrise, the natural quantum of matter and mass.

Quantum spinrise is a composite real object made of three concentric primal forms (quanta) of matter. We know this object as the ordinary neutron. The three neutron forms are the inner core [1a], the outer membrane [2a], and the contained plasm [3a]. Each primal form is a discrete quanta of matter with invariant physical properties.

The Neu Theory model does not provide a reason why the twin quantum primal energies create the three neutron forms, and only these forms with their invariant fractional distribution of mass. We can only speculate and work with what the facts of experience provide.

Figure 1.2 – The Synthesis of Primal Matter[/caption]

The Synthesis of Primal Matter

Let us imagine the two balls of movement/energy (fig 1.2) coming together and merging into each other, linking together, creating three concentric homogenous substances with mass. We call this linked state of spin and rise movement/energy quantum spinrise matter with quantum neu mass.

Each of the three quanta of matter is made from the combined 6 absolute properties of each primal movement/energy form. This combined state is assigned the colors black and grey to indicate that the red and blue color forms have merged their individual identity and have become something else. This something else are the three forms of matter in the form of the ordinary neutron. Black indicates matter at absolute density, and grey indicates matter with a variable density.

Refer to the neutron form diagram shown in Figure 1.2. The composite black and grey object symbolizes that:

Static Equilibrium results in the physical properties of shape, size, substance, and structure.

The fractional distribution of quantum mass between the 3 quanta of matter is:

Let us first consider the core as it represents more than 99% of the total matter in the universe.

Dynamic Equilibrium results from the uniform universal acceleration or "natural acceleration" of spinrise matter that creates two permanent physical properties. These are:

It is hypothesized, that natural acceleration acting on the spin movement/energy part of spinrise, causes the neutron matter core to physically rotate with a right-hand rule at the current speed of light, maintaining a constant period of revolution (1.764 366 x 10-23 s) and frequency (5.667 758 x 1022 Hz) based on physical size.

This physical movement is called g-spin by Neu Theory. The g-spin of the core generates a permanent magnetic dipole field surrounding the core. This is a movement/synergy form that is permanently aligned with the spin axis that projects a magnetomotive force into space with a donut shape.

All cores in nature spin in the same direction with a right-hand rule.

The magnetic dipole of the core flips when the quantum state changes from the neutron a-state to the hydrogen b-state, however the the direction of spin remains fixed.

It is hypothesized that natural acceleration acting on the rise movement/energy part of the spinrise ball causes the surface of the matter core to physically rise at an accelerating rate that is less than or equal to the current speed of light. This perpetual physical acceleration-in-place is called g-rise by Neu Theory.

G-rise creates a pushing force that is we experience on the earth’s surface as gravity. G-rise is a force that we can feel but cannot see. In the Neu Theory model, gravity is not a universal attraction. It is the perpetual push by the 3 quantum matter forms acting together in large numbers.

The g-rise of the collective cores (+ membranes and plasms) project permanent spherical movement/synergy forms into space called spinfields that surround all physical objects. The g-rise/spinfield effects are based entirely on mass and volume, and project into space with a limited effective range that Neu Theory calls the spinfield hollow volume. G-rise at acceleration values less than the current speed of light are designate spinfields. G-rise at acceleration values equal to the current speed of light are designated hyper spinfields. Hyper spinfield "gravity" is different from spinfield "gravity,"

The g-rise of spinning cores represent more than 99% of all the g-rise in nature.