The Fundamental Forms of Nature

The Building Blocks of Nature

With the synthesis of hydrogen, all of the different pieces in nature’s jigsaw puzzle are present. Remarkably there are only eleven different types of pieces. We shall call them fundamental forms.

In the following table the rows are the eleven fundamental forms in the two quantum states. The columns are the fundamental physical properties.

The physical properties can be measured and they become part of the constants of nature.

The physical properties are divided into two parts: 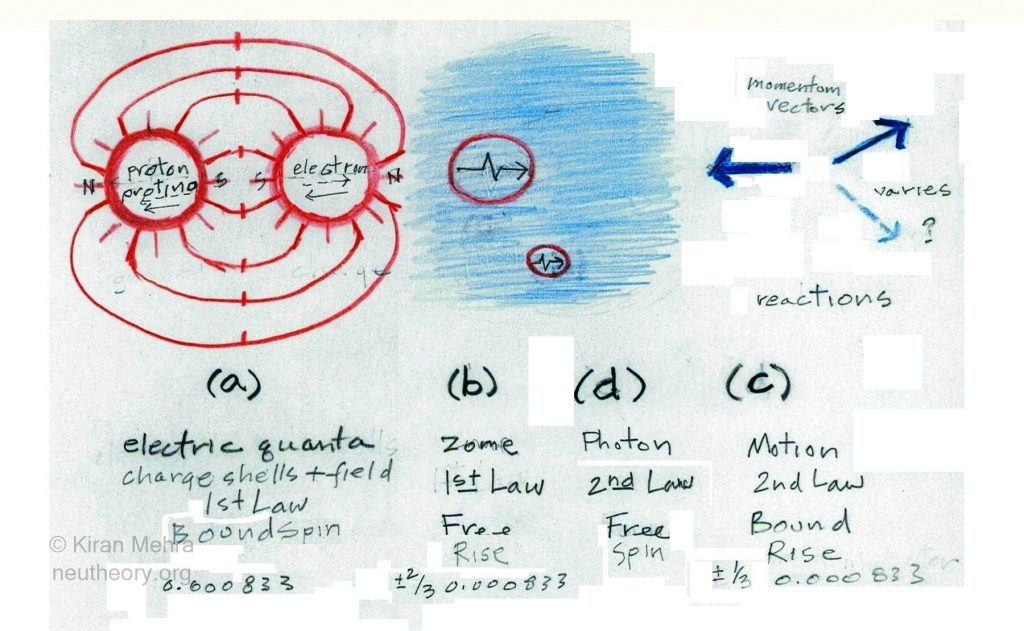 Seven of the eleven fundamental forms of nature can be considered elementary particles.

Five of the seven elementary particles are fermions, meaning they maintain discrete boundaries between themselves.

Two of the seven elementary particles are bosons, forms of energy that can pass through each other, however cannot pass through the fermions.

All other fundamental forms of nature [4][5][7+][7-][9][10] are dynamic properties of elementary fermionic particles and cannot exist without the underlying existence of the particle or particles themselves.

There are five matter objects. All five objects are discrete fermionic entities:

There are two free energy objects. Both are bosonic:

The neutron is the a-state of matter and is made from fundamental forms [1a], [2a], [3], [4], [5]. The neutron is a completely neutral composite object, a topological whole. Only the matter core [1a] of the neutron spins, the membrane matter [2a] and hollow plasm matter [3] do not spin.

The quantum spin results in a fixed rotation of the core, with a permanently aligned magnetic polarity, that is anti-parallel to the spin vector [4].

The neutron has a variable g-rise/spinfield [5] depending upon its overall size or wavelength.

The neutron carries kinetic energy [9] which is transferable to other bodies.

The neutron is stable below the charge shield of an atomic nuclide, but is unstable when free from the nucleus and exposed to space, spontaneously transforming into the b-state proton and electron matter objects, and the six environmental energy forms, [6], [7], [8], [9], [10], [11].

The quantum spin results in a fixed rotation of the core, with a permanently aligned magnetic field that is parallel to the spin vector [4], and is approximately 50% stronger than the neutron.

The proton carries kinetic energy [9] which is transferable to other bodies.

The electron matter has the same mass and volume, as the neutron membrane it came from, but unlike the neutron membrane, which has no spin, the electron ball spins [4]. The quantum spin results in a fixed rotation, with a permanently aligned magnetic field that [4], that is anti-parallel to the spin vector and is ~ 960 times stronger than the neutron.

The electron carries kinetic energy [9] which is transferable to other bodies.

The deuteron is the ab-state of matter. The deuteron consists of a neutron cell with a captive proton core. The positive electric charge shell of the proton has migrated above the neucleonic surface.

The deuteron is made by two protons and one electron, combining together in a spin-on process, that is the reverse of the spin-off that occurred with neutron fragmentation.

The synthesis of the deuteron, the first nucleon, is also Step 4 in the Atomic Matter/Energy Cycle and the beginning of the rebirth of a neutron. See Figure 4.3.

The deuteron is the precursor to further acts of fusion. Without this initial act of charge migration, it is speculated, that atoms beyond Hydrogen-1 could not be formed.

The helion is the abb-state of matter. The helion consists of a neutron cell with two captive protons. The positive electric charge shells of both protons have migrated above the neucleonic surface.

There are two methods by which helions are manufactured. See Figure 4.4. The synthesis of the Helion, the second nucleon, is Step 5 in the Atomic Matter/Energy Cycle, continuing the process of neutron regeneration.

The helion is stable as a free nuclide, but is unstable as part of a neucleon cluster, emitting a positron to become a deuteron and a neutron..

Space or Zome in Neu Theory is the bosonic addition of ~0.87N expanding and diffusing-in-place zomons that create nature’s largest physical object.The zomon of space [8], is a part of the b-state of matter and the average pulse is made from ∼ 2/3 of the de-linked rise movement/energy of neutron plasm matter [3a] after transformation. The total energy of universal zome as hypothesized by Neu Theory is equal to the total energy current science attributes to the neutrinos that are said to fill the universe.

Universal Zome, is the isotropic one way expansion and diffusion-in-place at the accelerating speed of space, of pure free rise movement/energy, that is being perpetually replenished with fresh bursts of zomon pulses, from transforming neutrons, that are being ejected from active galactic supercells.

The number of zomons at any moment of history is equal to the number of electric charge couples (∼ 0.87 N). Topologically the zomon number is decreased with the synthesis of a neucleon, and increased with a little bang (beta decay).

The photon of light [11], is a b-state particle and is made in three ways:

Light is the bosonic addition of spin energy bubbles that fill space, and are being transported by space at an accelerating absolute speed. Zome is the common carrier of light. Photons represent the largest number of objects that exist at any moment in nature, with some estimates in the range of 100 billion or more photons for every neutron, proton or electron in the cosmos.

Photons are considered 2nd law energy objects that do not accelerate with time. Neu Theory estimates that around 0.2 % of the total spin energy of the universe is carried by photons.